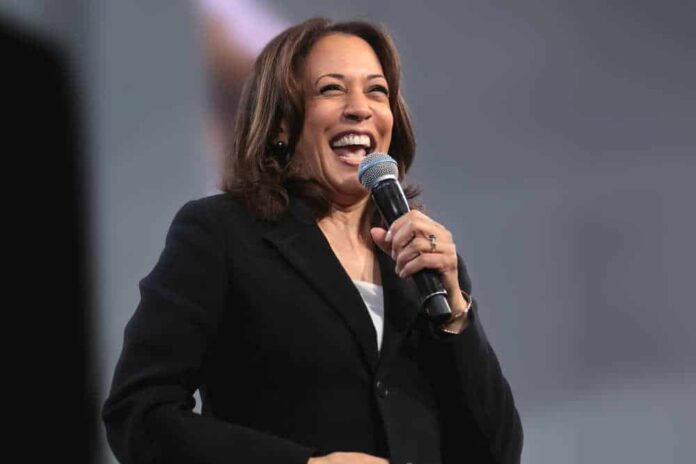 Kamala Harris, the woman who rose to fame as a U.S. Attorney and Mauri’s girlfriend, will campaign for Gavin Newsome. Newsome is so unliked by his state that he has been recalled, and an election is taking place in September to replace him. Newsome won’t even be listed as a Democrat because his staff messed up and didn’t file paperwork in time.

The left can ignore statistical data entirely and run with a narrative that will make them sound like a political God sent down from heaven. Harris has a mannerism where she laughs, more so cackles when she’s confronted with the truth. She did this when confronted with the border and responded, “And we haven’t been to Europe,” and she also did this on the debate stage.

Gavin Newsom has the same ability to lie. On Fox News, Newsome was interviewed at what seemed to be a gas station and was asked about policies making crime worse, and Newsome responded, “The evidence doesn’t back it up.” Hold there. U.S. News reported that homicides in California jumped 26% from 2019 to 2020, and the data shows it’s been more of a rollercoaster effect than a decline. Newsome continued, “over the last three decades, we’ve seen a significant decline in crime in the state. You’re seeing crime increase in red states that have no criminal justice reform, and that’s consistent with the crime rates we see here in California, particularly the states gun-related crime.” While that may seem like California’s policies and laws are working, consistency is essential.

If California’s crime rate is consistent with the rest of the country, then wouldn’t that mean that criminal justice reform hasn’t worked? Wouldn’t that show that Newsome wasted taxpayer time and money on a useless endeavor? It does.

Videos are surfacing of criminals in California stealing trash bags full of merchandise with no sense of urgency or attempt to conceal products. California turned law-abiding citizens into criminals when people were arrested for keeping their businesses open and not wearing masks in public, letting criminals go free when they loot stores. These are many of the reasons Californians don’t trust Newsome as their Governor.

Harris declared she was campaigning for the soon-to-be ousted Governor, and it calls into questions where her loyalty lies. Kamala Harris is the Vice President of the United States. Not a low title. Her campaigning for Newsome takes her away from that Office and her responsibilities. The border is a disaster, and Harris is responsible for it, yet she’s doing nothing.

Larry Elder is currently way ahead on the Republican side of the recall, and California Republicans and Republicans across the country are championing Elder for the win. Talk about a change in policies. Elder is at 16% on the polls, only followed by John Cox according to Emerson College Polling. The vital part of looking at is the undecided column which shows 53% of voters aren’t sure who they’ll vote for. Gavin Newsome is ahead of everyone as of now, but things can change very quickly.

If Harris’ support of the failed Governor is any sign of what policies she supports, America may be in trouble, because let’s face it, nobody wants Newsome-style policies coming from the White House.

Harris would be much better off politically if she kept herself in Washington, D.C., or Texas fixing the border crisis. Still, the fame-seeking Vice President looks for any camera action where she can look good, and it’s already expected that Harris will run for President in 2024.