Nearly 4 million Texans lost power during a historic ice storm this week, a storm that ravaged a broad swath of the country. Rep. Alexandria Ocasio-Cortez (D-N.Y.) has claimed that the blackouts demonstrated a failure of Texas’ infrastructure and therefore made the case for her Green New Deal climate boondoggle. However, the opposite is true. Not only did green energy of the kind AOC prefers contribute to the blackouts, but her solution would actually have made the problem far worse.

“The infrastructure failures in Texas are quite literally what happens when you *don’t* pursue a Green New Deal,” AOC tweeted on Wednesday.

Alex Epstein, founder of the Center for Industrial Progress, ventured to fact-check the congresswoman.

“Is any platform fact-checking [AOC’s] claim that the GND is the solution to TX? Let me help,” he tweeted. “The GND calls for mandating wind/solar and eliminating natural gas, coal, and nuclear. Look how wind/solar have performed in the last week,” he wrote, sharing a graph of Texas’ renewable energy drop during the storm.

“Under the [Green New Deal] millions would have died,” Epstein explained. 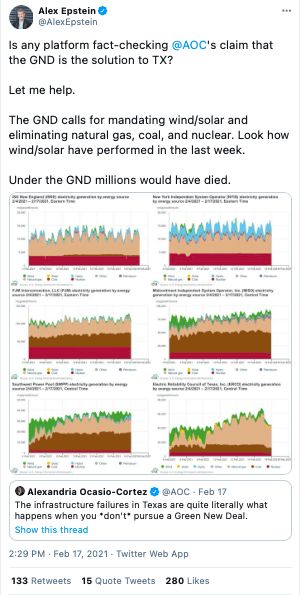 When Fox News host Tucker Carlson claimed that “the Green New Deal came to Texas” and was responsible for the blackouts, PolitiFact rushed to counter his claim. PolitiFact noted that wind energy makes up merely 10 percent of the Electronic Reliability Council of Texas (ERCOT) power-generating capacity. Yet as PJ Media’s Bryan Preston explained, wind power fluctuates between about 25 percent of Texas’ electricity in the spring and summer to about 10 percent in the winter — a fact that should set off alarm bells all by itself.

The historic storm hit many forms of energy production, but it hit wind energy hardest. Natural gas compensated for the drop in wind energy output, but not enough. Wind energy was not wholly responsible for the blackouts, but the data suggests that if Texas had transitioned to even more wind and solar, the blackouts would have been worse, not better.

“Many, including myself, have warned for years about the dangers of relying too heavily on unreliable, intermittent forms of electric generation like wind and solar to meet the energy needs for thirty-million Texans,” Christian wrote. “The issue isn’t the existence of renewable energy, but that it has displaced reliable generation (coal and nuclear), not through natural market forces but through massive subsidies and punitive regulatory policies from progressives in Washington D.C.”

“ERCOT was notified over a decade ago that Texas power plants had failed to adequately weatherize facilities to protect against cold weather. A federal report that summer recommended steps including installing heating elements around pipes and increasing the amount of reserve power available before storms. Instead of spending our resources making our grid more resilient, policy and spending has focused on mandating or subsidizing wind and solar to expand their presence on the grid,” he explained.

“The takeaway from this storm should not be the failure of fossil fuels, but the failure of leadership at ERCOT and the dangers of relying on intermittent, unreliable forms of energy like wind for a quarter of our energy needs,” Christian argued. “It shows as clear as day that the goal of 100% renewables by 2035 is unrealistic and attempts to get there will only increase suffering and harm Texas families during adverse weather conditions.”

The bottom line? “Had Texas been using 100% renewables, we would have had 100% blackouts.”

“While we don’t know yet what exactly caused certain gas and coal plants to go down–lack of resilience for those plants, grid mismanagement, or fuel infrastructure–we know with 100% certainty that gas and coal plants can easily run in far more adverse conditions than TX has now,” Epstein noted. “And we know with 100% certainty that even if no wind turbines had frozen they would have been nearly useless during large portions of recent weather.”

“If you are looking at the facts in TX, the obvious lesson here is: stop subsidizing and mandating unreliables–which are often useless when you need them most–and do a better job at managing reliables,” he argued.

In fact, the Joe Biden administration recently proved the point. The Federal Emergency Management Agency (FEMA) has sent emergency power generators to help amid the Texas blackouts. When FEMA reached out to help Texas, did the agency send wind turbines and solar panels? Hardly.

“FEMA has supplied generators to Texas and is preparing to move diesel on to the state to ensure the continued availability of backup power,” White House Press Secretary Jen Psaki said.

Yes, the Biden administration sent reliable fossil-fuel energy in the form of diesel to meet emergency needs, rather than the green energy AOC advocates in her Green New Deal.

Only high-yield reliable energy sources like fossil fuels, coal, and nuclear will meet Americans’ energy needs in a crisis.

America needs to invest in proven and reliable sources of energy, not transition to the pie-in-the-sky Green New Deal. ERCOT needs some serious reform and Texas does need to update its infrastructure to prepare for severe storms, but none of this translates to a Green New Deal.

AOC won’t listen to those arguments, though. To the hammer (and sickle?) of climate alarmism, every disaster looks like a nail, calling out for heavy-handed green government mandates.

MUST SEE: Stephen Miller EXPLODES on Biden When He Shows Up On FOX NEWS

Biden’s Response to Texas Compared to Donald Trump PROVES Our Nation Is in Deep...

MUST SEE: Stephen Miller EXPLODES on Biden When He Shows Up On FOX NEWS

Trump Destroys the Supreme Court for Refusing to Stop the ‘Continuation of the Greatest...

MUST SEE: Stephen Miller EXPLODES on Biden When He Shows Up...