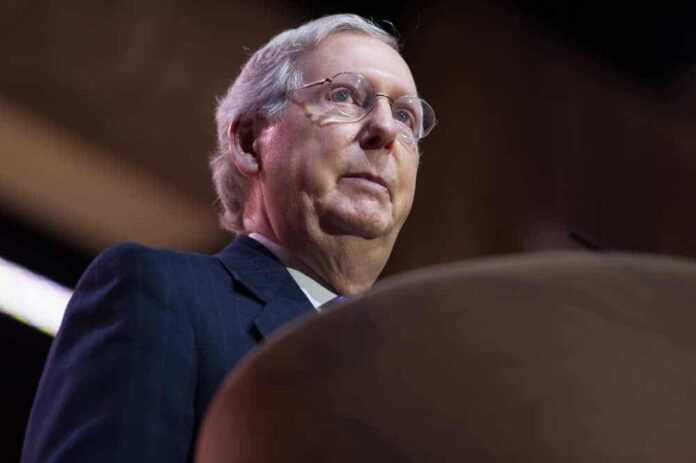 Republicans are not cheery about the remarks of Senate Minority Leader Mitch McConnell, who seems to them to be acting like democrats. Mitch grumbled at Americans for not being sensible enough to get a vaccination of Covid-19, which is worsening day in and day out. He implied implicitly that more lockdowns were on the way if those shots of vaccines did not go into the arms of the people as quickly as possible without any further delay.

Republicans believe that it is the choice of people themselves if they want to get vaccinated or not. The government cannot force them to get vaccinated under the pretext of a lockdown and cannot pressurize the public. What would come with the lockdown would be more jeopardizing. There will be more marches in comparison to what occurred in Paris and London. It would be of no help. Like a Republican, Mitch should make threats in the manner he does. Otherwise, if he cannot stand for freedom like republicans, he should renounce his membership.

According to the republicans, it is their right to freedom to get the shots or not. Considering it a sense of responsibility, their leader addressed them to do their part and save the country from further damage. They took over Twitter to hold him accountable for his address, which was the opposite of what a Republican would say. He was attacked and cursed by both sides.

Mitch McConnell: "The GOP is the party of limited government!"

Also Mitch McConnell: "Everybody get the jab now or we're shutting down America again!" https://t.co/sjESnNybF1

People went to the extent of warning him that if he does not do what is expected of him, he will not win upcoming Elections, and they would give up on him. Apart from restraining from calling for a shutdown, Mitch should stand against Biden’s tireless effort to repress speech, yet he fails at it.

There's an election in 2022, so @LeaderMcConnell might want to act accordingly. https://t.co/jYXsCUJ5iF