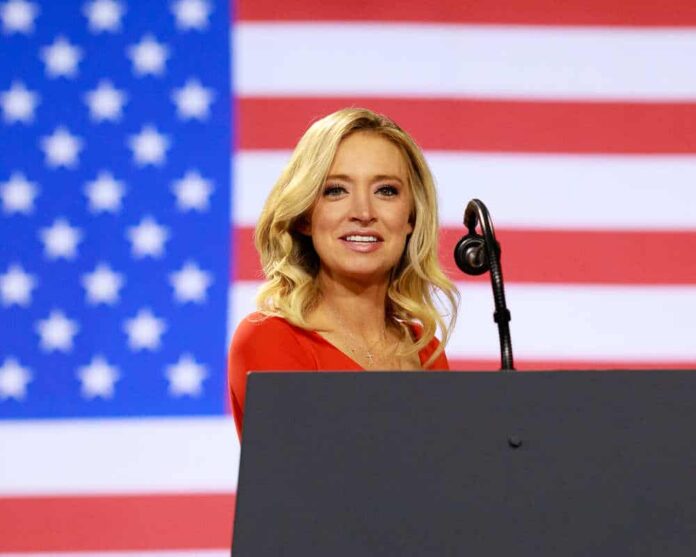 Kayleigh McEnany battled with journalists from many news networks in her time as Press Secretary and answered questions as clearly and honestly as possible. There were rarely “softball” questions given to her, and journalists would often argue with her while on the White House podium.

Fast forward to the current Press Secretary, Jen Psaki, who gets many soft questions during these press briefings and seems unprepared and uninformed in her responses. Psaki coined the phrase “circle back” when answering questions when she had no answer.

McEnany told Fox News about Psaki’s admission that the White House is flagging posts for Facebook, saying, “Imagine if I stood at the podium, Pete, and said, ‘we’re censoring the lies about Lafayette Square, that President Trump gassed protestors for a photoshoot, that never happened, imagine if I said we were censoring that. We’re censoring information that doesn’t agree with the lab leak theory. We’re censoring information on Russian bounties.’ All of those things were lies, but guess what, in this country, there’s the first amendment, you’re allowed to say what you want with very few exceptions, uh, I would have never said that from the podium. She got the administration into a lot of legal trouble, and I’m telling you this. I just tried to make sure I said everything accurately, she’s managed to stumble into a legal swamp, and I guarantee you there are a few people at the DOJ (Department of Justice), at social media that are very unhappy with the things that were said at that podium.”

Imagine a world where McEnany said that Trump’s White House was doing things like that. Trump was lied about on numerous occasions and never censored anyone. Biased media and social media manipulation were a large part of why Joe Biden got elected. For his administration to continue down that path, he will set them up for many legal troubles down the road.

Media should be trusted, the White House should be trusted, but we live in a country where the media and the White House are destroying their integrity for the sake of political gain. The checks and balances of this country are going to ensure that stops. I would say that the Federal Bureau of Investigations or the U.S. Attorney’s should get involved and investigate the situation. Still, the U.S. Attorney’s office hasn’t even investigated Hunter Biden’s tax evasion and laptop scandal yet, so it seems they’re conveniently backed up. The FBI is also profoundly interested in the January 6th Capitol riot probe, which Pelosi has prioritized above all else, ignoring the border, inflation, and the Bidens.

The left needs to back off and allow the American people the rights given in the Constitution and leave us alone. That’s how we like it, and that’s what we want; freedom, less government control, less censorship, and the ability to make a living for our families without unnecessary tax increases and price increases.